By now it has become a truism that Donald Trump’s success in the 2016 presidential primaries can be attributed in no small measure to the support of white voters who harbor deep, seething resentment and anxiety about “changing demographics” – that inexorable transformation of the white population to minority status. Twenty-seven years from now, the U.S. Census Department predicts, African Americans, Latinos, and people of Asian descent will be the majority, a development apparently frightening if not dystopian enough for some white people to cast their lot with a candidate whose level of self-absorption and inexperience is matched only by his level of contempt for policy, women, Mexicans, and Muslims (that’s just the short list).

But what, precisely, is it about changing demographics that makes Trump so appealing to his white supporters? And why does imagining him in the White House assuage their fears about becoming racial minorities?

No one who has written about demographics and Trump’s appeal has really addressed these questions and, as a result, the phrase “changing demographics” reduces too often to a mantra of sorts, something one repeats with the conviction that it both clarifies and enlightens.

I suspect these questions haven’t been addressed because those who have written about Trump and “changing demographics” assume that the impending population shift will be a rather seamless and mundane political moment – indeed, that it will be a natural evolution through which one kind of body (brown) will, by virtue of its existence, take up the political space and share the power of another (white).

“New political agendas will be set by non-white voters and the non-white politicians they elect,” writes Amy L. Bernstein in “Face it, we’re on our way to being a majority minority country.” “The dominant white power structure will not disappear overnight, but it will be diluted, integrated and subsumed in various ways, great and small. Big money, and big business, may retain their outsized influence, but over time the money will flow to – and from – different hands.”

Sounds painless, right? And yet these key words in Bernstein’s prediction should give us pause: “the dominant white power structure will not disappear overnight.” Let me just restate that sentence in blunter terms: white people (generally speaking, of course) control the nation’s political, economic, social, and military institutions. They will retain this control long after the year 2043, when whites become a minority.

These truths the “changing demographics” mantra – and those who use it to narrate a seamless transition from white majority to white minority status – simply cannot bear. Indeed, the mantra ultimately ensures that we dare not speak the implications of what it will mean, for whites and people of color, when the majority that controls so much becomes a minority firmly in control of so much. More pointedly, the mantra guarantees that we never even consider that some of our countrywomen and men are deeply invested in, and absolutely committed to securing for their and their children’s future, something akin to “white minority rule.”

The politics of the current election cycle, however, beg us to discard the benign “changing demographics” narrative and to come to grips with the sense of crisis – expressed so poignantly by Trump’s successful primary run – that an increasingly fearful segment of the white population is beginning to feel about the transition from majority to minority status.

Indeed, I think it is fair to view the Trump campaign, the GOP assault on voting rights (17 states, Ari Berman recently noted, “have new voting restrictions in effect for the first time and 15 states have new or tougher voter-ID laws”), and the general GOP crack-up as being, in many ways, the messy, ugly work of sorting out and settling, not the question of how to accommodate and live with the reality of an increasingly diverse electorate, but instead the question of how to safeguard white power – the rule of some whites, anyway – when whites are no longer the majority.

In other words, what we’re witnessing with the GOP generally is (as Stan Greenberg puts it) “a ferocious counterrevolution to stop these new and expanding demographic groups from coalescing to form a politically coherent bloc capable of governing successfully” – or, conversely, a war to ensure that “the dominant white power structure” maintains its grip on our political, economic, social and military institutions regardless of how expansive and numerically overwhelming these new demographic groups become. “What happens when we have no control over things?” asked League of the South member and white nationalist blogger Brad Griffin in a recent New Yorker feature article on Donald Trump’s nationalist coalition. “You’re seeing it play out right now.”

For many Trump/GOP supporters, in fact – those who are professed white nationalists as well as those who are not – Barack Obama’s ascendancy to the White House made it abundantly clear that they must act now to secure control for the future. Border walls, disenfranchisement, mass deportation, gerrymandering, continued support for a militarized police force within African American and Latino communities, unfettered gun rights – these just make sense as strategies of containment to guarantee white power now, white power tomorrow, white power forever. 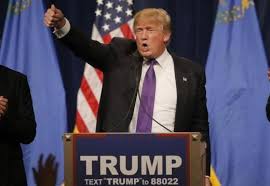 So, too, does support for authoritarian, fascist-leaning, racist, strong-arm leadership. Democracy, after all, has proven to be the enemy, the very mechanism that opened the doors to an influx of immigrants of color and greater political participation of communities historically marginalized through the exercise of white supremacist politics and economics. Donald Trump is thus a godsend, and perhaps in the mind of some a precursor not so much to a future Hitler, but instead to a future F.W. de Klerk. “White men in America and across the planet,” proclaims Daily Stormer website author Andrew Anglin, “are partying like it’s 1999 following Trump’s decisive victory over the evil enemies of our race” (how ironic is it that Stormer makes his white power point by quoting the music of the late African American entertainment icon Prince Rogers Nelson?). “Who needs Muslims? Who needs Mexicans? Once you ask those questions, you think, who needs Haitians?” asked white nationalist American Renaissance editor Jared Taylor during a Wall Street Journal interview. “Mr. Trump is reacting in an almost visceral way to the idea of whites becoming a minority.”

Those Trump and GOP supporters who are driven by their fears of becoming racial minorities are truly canaries in the mine. They are letting us know in no uncertain terms that, for many whites, there’ll be no partying like it’s 2042, no passively facing the fact that “we’re on our way to being a majority minority country,” and certainly no capitulation to the idea that “nonwhite voters” will set “new political agendas” or that “Big Money… will flow to – and from – different hands.” What we’re witnessing now portends even more troubling efforts, by some within and outside of the GOP, to secure white power for a white minority future – efforts that will surely be met with great resistance from the emerging majority as well as from many white people. This is what “changing demographics” means, and if we don’t “face” that – if we don’t speak frankly about being on track for a collision course with those who will resist, at all costs, a “white power structure…diluted, integrated and subsumed,” then we’re setting ourselves up for being wholly unprepared for the possibility of a very tumultuous, if not violent transition.

But we don’t have to stay on that track.

To get off, we need to make a thing of the past the power exercised now by the (not so exclusively white) “power structure,” so that that power won’t be a thing of the future. This we can accomplish precisely by engaging in on-the-ground organizing to up-end the structural economic, political and social inequalities that this “power structure” hopes to make permanent features of everyday life for us all – including many of those who fret about becoming racial minorities. We need to turn “changing demographics” into a mantra for the adoption and implementation of such egalitarian polices as a national living wage, a guaranteed income, fair trade, equitable urban redevelopment and the vigorous regulation of real-estate speculation, free higher public education, targeted and disproportionate funding for public primary and secondary schools located in distressed communities, effective regulation of financial institutions, drastic reductions in defense spending, the expansion of protections for labor organizing, progressive taxes, the transformation of law enforcement into nonviolent community peace keeping units, and the adoption of robust anti-discrimination laws in the areas of housing and employment.

What we need to do, in other words, is make minority status itself – that is, economic and political vulnerability and marginalization on the basis of race – a relic of a white supremacist past.