A different kind of labor

It is “quiet time” as I write this, a misnomer if there ever was one to characterize that coveted two hours when my two and-a-half year-old is supposed to take a nap or engage in some low key play activity in the privacy of her bedroom. She is having a deep but very loud and animated conversation with her dolls and stuffed animals. Periodically she says my or my partner’s name, and I have to suppress the thought that she might be casting spells from which we will never recover. I know that’s crazy to think, but guess what? It’s also radically insane that, at the ripe old age of 51, I have undertaken a journey with my partner to adopt someone who is not even 1000 days old. So I get to suspect that the child – or somebody – is casting spells and “workin’ roots,” as the old folks say. Not this old folk, but some other old folk. Someone older. Than me.

As you might suspect, I am a bit cranky and tired. And yes, it’s a “beautiful thing” blah blah blah. But I’m exhausted and I don’t want to say beautiful child-rearing things. She’s two and a half, for crying out loud. Funny, smart, cute, adorable, loving, precocious, and a pain in the ass. Like right now (she’s “tapping” the walls with her feet to the beat of a song that I believe she’s making up. Hmmm. It’s actually kind of funny. And quite good!). So of course I am also totally in love.

But I’m still annoyed and I’m still gonna say it (that’s one of the advantages of being an older mom).

In the early weeks of this journey I entertained the idea that I should write one of those Open Letters to My Daughter About What It Means to Be a Black Woman in America, but I nixed the idea not only because I find such projects problematic, but also because this little journey of mine has brought me face-to-face with my own none-too-subtle investments in tyranny (who knew how much the word “NO!” could drive me batty?). I thus realized that instead of focusing on what the World Out There might or might not do to my child, perhaps I should pay more attention to all the ways I might be bringing the world to her. 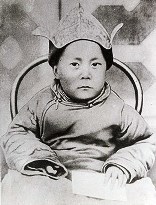 What if – just what if – instead of that open letter I looked at and raised my child as if she was the next Dalai Lama, a bodhisattva who has come to help us all achieve freedom from suffering? What if we all did this with our children? And what would be required of us to usher in and raise all of these Dalai Lamas? What do you think the world would look like as a result?

Admittedly, these are hard questions for me to ponder in the midst of a litany of “NOs” and “MINEs” and “AAHHHHs!!! (collapses on the floor, arms outstretched, rolls around. How, I wonder, did the monks deal with a two year-old in the midst of a tantrum – even if that two year-old was the manifestation of Avalokiteshvara or Chenrezig, the Bodhisattva of Compassion?). But they’re worth asking, for they require us to think of child-rearing in terms of making the world a better place, which in turn requires us to do the labor of changing everything about our own lives that makes us – on a day-to-day basis – complicit in creating an unjust, violent society. That labor is the work that goes into being compassionate, kind, open-hearted, loving, and just.

I guess in some ways this is, absolutely, an Open Letter to My Daughter About What It Means to Be a Black Woman in America.

My book is out! Nonviolence Now! Living the 1963 Birmingham Campaign’s Promise of Peace (NY: Lantern Books). Would love to know what you think about it!